Eeverybody else speaks so well. Aino has spent a year as exchange student in Kansas and Ilmo is an online game enthusiast. I’m the only one who isn’t fluent in English. I don’t speak well at all. I don’t know the language well enough to express my opinions. I feel so ashamed that I would rather vanish into the wall. I’ve better not say anything. I’ll fail.

How many students have been silenced by shame in language class? It is traumatizing to be criticized for anything as personal as your inability to express yourself correctly in a foreign language. And the shame of failure is deeply stored into the body where it gets stuck. The problem is, that it is not easy to unleash these bad memories, unless we address the body itself, instead of just intellectually processing the trauma in words.

Last week I had the great pleasure of attending the second International Home in the Body Seminar arranged by Elämäntaidefoorumi at UKK Institute, Tampere. Once again, Rosen Therapist and Essential Motion leader Riitta Saarikko and her wonderful team had managed to put together a unique and very thought-evoking program. This time the conference presented several therapeutic body methods for curing trauma. The keynote speaker was Arnoud van Buuren, Psychiatrist and Pesso-Boyden System Psychomotor specialist from the Netherlands.  This body-mind approach was originally created by the American dancers Albert Pesso and Diane Boyden-Pesso, defined as follows: “PBSP heals past emotional deficits using unique processes called ‘Structures’ and ‘Microtracking™’ that help clients to identify emotional deficits and create ‘new memories’.” In other words, traumatic memories are replaced by new pleasant memories in a process where the body is involved.

This year the Home in the Body seminar also introduced Voice as an essential part of embodied awareness. Classical song teacher Iiris Seesjärvi has initiated a therapeutic approach to voice teaching, named Häpeästä hiljaiset, shared at the seminar by song pedagogue Demian Seesjärvi. There are many Finns who have been traumatized by the notorious song exam at school, where you were asked to sing in front of the entire class. Many would have felt the failure deep in their bodies when they were not able to sing according to standard criteria. As a result, they were shamed into silence.  I believe that the same has happened in some language classes when people’s pronunciation and grammar has been mocked and ridiculed. I’ve met students who had been asked in secondary school to remain silent since their English or Swedish was judged so poor by their teacher that they were denied the right to speak up. I truly hope that pedagogy is changing into a more constructive direction.  Naturally, Demian’s workshop would be welcome at Haaga-Helia too – for those who sit silently in class, afraid to speak up. I mentioned this to him and he found the idea appealing. Theories on the development of speech suggest that humans were singing before speaking, thus therapeutic song lessons would be very suitable in a business school, in the same way as is my Dancing English Teacher approach based on embodied awareness.

Finally, we teachers have great responsibility in how we involve everybody into classroom discussions. I myself always start my classes with tension-releasing body warm-ups before moving onto discussing the topic of the day. This helps the shy students to relax and a sense of heightened awareness is created within the group. In my courses there is only one sentence that is not accepted: “I don’t speak English well”. That is just a reflex from traumatizing classroom experiences. An annoying tick that has to be unlearnt. Furthermore, it is a totally redundant as well as counter-productive phrase when doing business! Instead, pull up your posture, take a deep breath, expand your diaphragm – and take a long step into the world.

Once more, I’m grateful to Elämäntaidefoorumi for creating this wonderful Home in the Body seminar concept. In the snapshot you see me opening up my wings at the end of Scott McLeod’s Clean Language workshop. As I told the group: “I arrived burdened and now I have wings to fly away.” 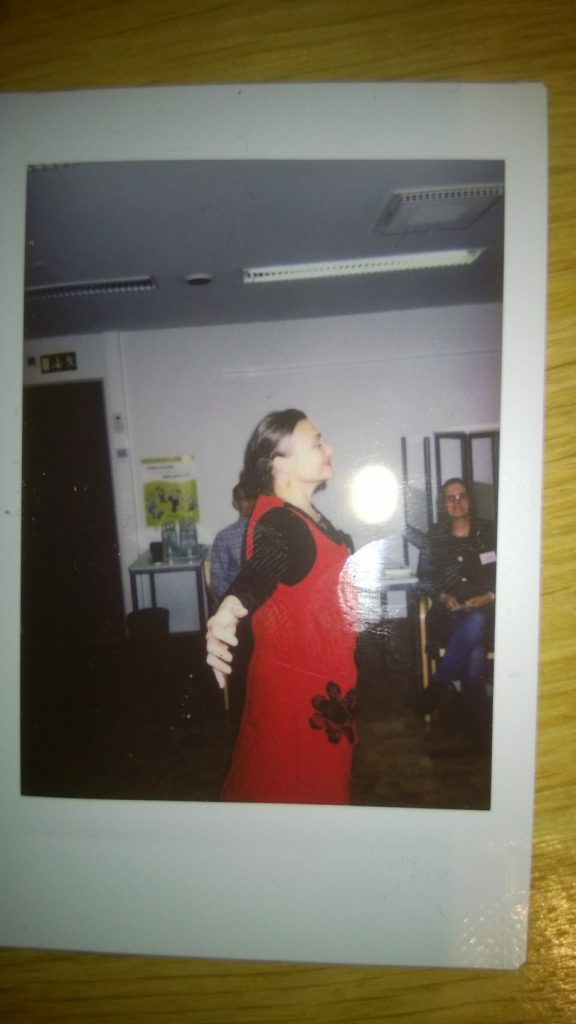