A Damsel, a Black Robe and a Renaissance Campus

If I were to choose a historical era, it would be the Renaissance: Florence of the Medicis or Shakesperean London. Today, when the focus is increasingly on specialization, I admire the multi-talented Renaissance man with his many interests ranging from science to the fine arts.

Surprisingly, the Renaissance has become very much alive for me on Porvoo Campus. Upon entering the lobby, the visitor will soon realize that he is standing on the stage of a Renaissance theatre.  The spectators are passing by on the upstairs galleries and at any time Juliet might appear proclaiming: “Oh Romeo, Romeo! wherefore art thou Romeo?” Notably, architect Jukka Sirén designed the space according to the principles of a Renaissance theatre, where the actors and spectators are in close interaction. Similarly, the Campus lobby can turn into a stage at any time when it becomes the focus of an event. The space has hosted everything from job fairs to gala dinners.  As a matter of fact, we have even danced Renaissance dances there! Last April, when we had the Alumni Party on Campus, I was invited to wrap up the evening with a historical dance which everybody could join. Thus we all turned into damsels and courtiers of a Renaissance court. What sublime elegance!

The Renaissance can even have pedagogical implications in business studies. In autumn 2012 I had the joy of being invited by my Haaga-Helia colleague Ulrika Lindblad to observe the initial stages of the implementation of her book-keeping game, Venetsian kauppiiaat. Lindblad developed the game to teach students double entry bookkeeping in a fun and creative way. Yes, we even danced Renaissance dances in accounting class on Porvoo Campus before plunging into the secrets of bookkeeping in Renaissance Venice! Subsequently, the game has been turned into a commercial product by the RDI department. What a wonderful idea to combine bookkeeping and cultural studies.

Naturally, a Renaissance space demands a Renaissance costume.  During the Night of the Arts in August the Finnish National Opera organized a flea market. They were selling out the costumes from the 1998 production of Donizetti’s opera Anna Bolena. By luck, I came across a splendid Renaissance velvet robe. Anne Boleyn was the second wife of Henry VIII and the mother of the future queen, Elizabeth I. As we know, her life ended violently in decapitation. Yes, it was a brutal era and life was often brief. So, maybe a time journey of walking around 21st century Porvoo Campus clad in Renaissance costume is to be preferred. Yet, the Renaissance era can serve as inspiration, be it for learning bookkeeping or a Branle des Chevaux dance. Or for educating well-rounded Renaissance men and women for 21st century business life. 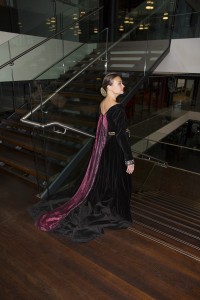 Dancing English Teacher holds an MA in English Philology and is a certified dance teacher. She takes interest in introducing dance and movement improvisation into vocational business studies. Dance is a shortcut to embodiment, kinesthetic awareness and efficient team work. Thus, business students benefit from dance and movement studies.
View all posts by Pia Kiviaho-Kallio →
This entry was posted in Uncategorized and tagged Campus, Porvoo, Renaissance, space. Bookmark the permalink.