Of Little Mice and Dancing Ladies

In ballet class, my generation of dancers can be recognized by their graceful arm movements and upper body placement. We were taught in the Vaganova method by old school ballet teachers: Airi Säilä, Ritva Kuusinen-Schorin and Margaretha von Bahr. These great pedagogues passed on the art of ballet to generations of young girls who are today in their forties, fifties and even sixties. I can immediately spot these students in class by their perfect coordination of head, shoulders and arms. To the question “Who was your teacher?” the reply is likely to be one of the three iconic names mentioned above. I myself take great pride in being Margaretha von Bahr’s last student, taking classes with her from 1975 until her retirement in 1988. 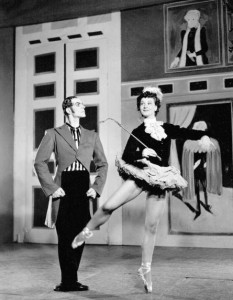 This post will be about the art of teaching. However, I realize that all my role models happen to be dance teachers, Margaretha von Bahr naturally having influenced my development the most as she was my very first ballet teacher. I particularly remember her colorful stories, how she in the 50’s danced in The Fountain of Bakhchisarai on the huge stage of Bolshoi. Telling about the steeply slanting stage, when being used to the flat stage of the tiny Finnish Opera House, today known as Aleksanterin teatteri. The slanting stage had been a major challenge to the Finnish Prima Ballerina, yet after having overcome the initial shock she had given the performance of her life-time! There were other stories such as attending glamorous cocktail parties hosted by Tyrone Power in Hollywood or cruel tales about jealous rivals who were likely to put glass splinter into point shoes. In the eyes of a seven-year old suburban child, Margaretha von Bahr was the most glamorous being one could imagine. In class she often wore a mustard-colored jump suit, however in just 15 seconds she could transform into a gala queen by pulling out a slippery evening gown from her bag, this was during occasions when she needed to attend a first night at the Opera House or some other social event right after teaching ballet class. This supernatural rapidity must have been derived from her dancing years with quick costume changes between numbers.  I also remember in detail the huge studio at the Olympic Stadium: the barre, the big wall-to-wall mirror and the black piano in one corner as well as the smell of resin used for the slippery floor. So what could then be applied into my own teaching? I claim that a good teacher is first and foremost a story-teller.

At the beginning of the 90’s I was more or less adrift as I needed to find a new ballet teacher. In summer 1990, half a year after the collapse of the Berlin Wall, I was attending summer school at the celebrated Palucca Schule in Dresden were I was taught by the legendary Ludmila Safronova from Vaganova Institut in Leningrad, she herself a student of Agrippina Vaganova. A couple of young Finnish ballet students were attending the same classes and they told me colorful stories about a horrible ballet teacher back in Finland. I decided to check him out as in my experience a teacher that evokes strong emotions is likely to be very good in one way or the other. And I was right, R-J turned out to be one of the best dance teachers I’ve ever encountered. Yes, he was very blunt and did not hesitate to use strong metaphors: “Your pas de bourré  looks like walking in chicken shit”, he could scream out in class. Understandably, some students did not like such abusive language and decided not to return. Yet, I loved the vibrant energy of the lessons, as did several boys from the Opera ballet school who attended the classes in secrecy in order to polish their technique. (I learnt that the Opera ballet school had forbidden them to take lessons from outside school. This again being a proof of the absurd rivalry in the ballet world). In sum, the pedagogical lesson learnt from these ballet classes is the following: a good teacher never attempts to please everybody. By following his own path, he/she is likely to evoke strong emotions for or against. Thus, if someone says “she is ok” about a teacher, my alarm bell immediately starts ringing as I’m expecting something bland to materialize. Finally, R-J has also been the inspiration for the title of this blog post, he used to call the young female students in class “little mice” and the mature women “old ladies”. However, since my husband did not like the collocation of “old ladies”, I took the liberty of changing it into “dancing ladies”. Over the decades and after giving birth to three four-kilo babies, I find myself transformed from “little mouse” to “dancing (old) lady”. It’s quite liberating, now I can fully enjoy taking ballet class and rejoice in small improvements without having hawk-eyed teachers constantly surveilling every move I make.

During the years 1993-1996 I was studying for my dance teacher’s certificate at Helsinki Theatre Academy. During this period I encountered many remarkable teacher personalities. In this post I wish to share the advice of one particular teacher, a pioneer of children’s creative dance, Mary Joyce. She emphasized the fact that if you are bored with your own teaching you cannot expect the students to be inspired either. This is very much applicable to my adult students at Haaga-Helia as well. More than once I’ve received the following student feedback: “I enjoyed coming to your English class since I never knew what to expect!” Yes, as teacher I want to surprise and to be surprised. Here I’m echoing the words of the celebrated American novelist Joyce Carol Oates when asked about her pedagogical approach as teacher of creative writing at Princeton: “I want to walk into a room and be surprised. I want to surprise myself. I want the students to be writing things I didn´t expect. I want them to say things about one another´s work as new. I want anyway to have my students impose any thoughts upon them at all. […] So there´s a lot of freedom.”  This inspiring quote is from a panel discussion at University of California Berkeley on 11 February 2011. Notably, on Porvoo Campus there is also a lot of freedom for creativity and pedagogical experiments in class, so being bored is a feeble excuse. Joyfully, this autumn there has been quite a lot of dance and movement and even some singing in my English lessons!

Yesterday, when attending ballet class, I ran into a very old acquaintance. I immediately spotted her at the Barre due to her beautiful phrasing of arms. Someone from the old school, a familiar face among all the new younger faces. “We have met in class three decades ago”, I opened the conversation in the dressing room after class. “Yes I remember you, did you train with Ritva?” “No, I was Margaretha von Bahr’s student.” “Ah, then we must have been in the same production of The Nutcracker where Margartha’s students did Lumivalssi (The Waltz of the Snowflakes).” Then we continued for a while, discussing the quality of the old school Vaganova teaching, a solid basis to fall back on even after a long pause in training. Yes, we carry our ten extra kilos with pride and the elevation of our leg in developpé is not at all what it used to be, yet the coordination, the épaulements and artistic use of arms is still intact. After all, it’s the upper body that creates the impression of dance – and the gaze into eternity when stretching out into a statuesque First Arabesque. As teacher I owe everything to my dance teachers as role models: the emphasis on energy, presence and posture in class. With a little touch of the Primadonna manners – yet not too much of that! Lessons can be likened to performances where the students hold the principal role. The teacher is there to inspire and to provide a creative environment for ideas to arise. 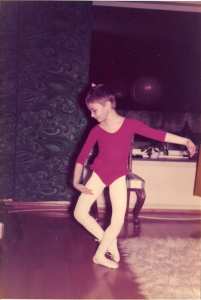 Dancing English Teacher doing a reverence at the age of 7-8.

Dancing English Teacher holds an MA in English Philology and is a certified dance teacher. She takes interest in introducing dance and movement improvisation into vocational business studies. Dance is a shortcut to embodiment, kinesthetic awareness and efficient team work. Thus, business students benefit from dance and movement studies.
View all posts by Pia Kiviaho-Kallio →
This entry was posted in Uncategorized and tagged ballet, teaching. Bookmark the permalink.