My preparation for wearing summer dresses: Scrubbed elbows and knees and a bruised hand, just as back in the summers of my 70’s childhood. The visible evidence of having this week taken part in a course called Havainnon harjoitus ja kehollinen ilmaisu at the  Theatre Academy.  I hope I did not scare you away by this graphic description of my red badges of courage – this is a course I can warmly recommend to anybody interested in the concept of embodiment and the relationship between cognition and movement. The course has been developed by contemporary choreographer Joona Halonen, who is also the instructor.

On Monday morning seven women of different ages assemble in a dance studio on the seventh floor at the Theatre Academy. The room is spacious and light with an open view over the rooftops all the way to Hakaniemi and Siltasaari.  The vast space itself is immediately inviting to movement explorations. I also like the fact that we get started without lengthy explanations, Joona Halonen just tells us that the meaning will unfold as the week proceeds. The first thing we do is a series of five Tibetan movements: turning five times in circular motion with hands dynamically stretched to the sides; lying flat on the floor and lifting the legs straight towards the ceiling; standing on the knees and tilting backwards; sitting on the floor and moving into a bridge and finally, the most difficult one for me, diving down and getting back into a stretched out position. The whole Tibetan series of movements is repeated three consecutive times. The very first morning I realize that this course is going to be physically and mentally demanding as we will be working between 10 am and 3 pm for five days in a row! But I am not going to give up that easily now when I have finally got myself here. And as the instructor says, the mind can make the body endure a lot of challenge. Actually, at the end of the day it is my brain that is the most tired after so much thinking – the body could still drag on. And who says that dancers don’t reflect or conceptualize? Articulate movement demands lots of thinking, otherwise everything becomes blurred and muddled.

On Tuesday morning I am painfully aware of the consequences of having lived such a sedentary life for so long. Yes, I used to be quite fit fifteen years ago. But that was back then – now I’m aching all over when I am limping down the steep Viides Linja towards the yellow Theatre Academy building, a beautifully restored old industrial facility on Haapaniemenkatu. 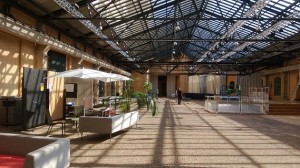 Downstair lobby at the Theater Academy

Yet, I am already curious to face the second day of the course as I have by now figured out that this is going to be something extraordinary. Again we settle down into the space through the Tibetan routine, I can feel my vitality growing. Despite the aching tie muscles, it is already more easy to get the breathing right and I feel more embodied than the previous day.

Day after day the course is gradually unfolding and I am regaining my lost body and dancer’s identity. I also gradually get used to being under the gaze of others. Every now and then Joona Halonen asks us to perform solos in front of the the group. As English teacher I am wearing a mask of professionalism, whereas here I am totally exposed. At the beginning it is scary, however, when the week proceeds I learn to enjoy being seen and more importantly, I learn to stay focused on what I am doing without letting the gaze of the others distract my concentration. Most importantly, I learn to carry on an inner dialogue between my mind and body, sending out orders to previously undiscovered surfaces and body parts. I often find myself exploring the floor, that’s why elbows and knees are scrubbed. The horizontal floor level is an interesting element for somebody trained in the vertical mode of classical ballet – at times I feel as if the perspective of the room had changed and I am hanging from the ceiling. I make a conscious decision of moving through resistance, not choosing the most obvious path that my body would normally take. This again opens fascinating discoveries about blind spots in my body and the vast amount of possibilities. Finally, I cherish Joona’s golden piece of advice: “don’t get stuck by what you just did, it’s already the past, now is now: now, now, now already passed by…now, now, now (nyt, nyt, nyt meni jo, meni jo!)

Especially joyous are the duets based on the following pattern: five steps in, five alternating steps in, rhythm with feet, rhythm with hands, five alternating steps out, five steps out. This basic form grows with additional variations over the days, bringing in something new such as carrying your partner in a still shape or shadowing your partner, not in canon but rather by anticipating your partner’s next move. Non-verbal communication of this kind is so genuine and true, happening in the moment. It is fascinating trying to understand the Other on the basis of movement only. And the results are very surprising and joyous when people of very different body types and dynamics meet.

The week is over too soon. I am left wondering how I am going to hold on to my rediscovered dancer’s body. Already next week I am supposed to sit for hours in meetings, this is not a bright prospect at all. During this course I have got a glimpse of how I would like to live the rest of my life: being embodied – being in motion – feeling vital and strong – being in genuine and authentic interaction with other people. Having a voice – yes we practiced air-boxing and screaming as well in the midst of more subtle forms of expression. And I was extremely pleased to notice that I can scream because for long I’ve been thinking that I have lost the ability to scream hard. Again, this is an exercise that many of my students would benefit from, but where to do it?

From the point of view of my own language teaching in Haaga-Helia there is so much I can directly implement from the insights I’ve discovered this week. First of all, I want to continue helping students to feel comfortable in their bodies and to understand the three-dimensionality of space. They also need to learn to focus and concentrate when being under the gaze of an audience. When speaking, the idea of now already being past is very applicable, too often students get stuck by language mistakes they just made. They need to learn to move on: now, now, now already passed by. Pick up a new thread! Continue, don’t hesitate! Take linguistic risks! I believe that training the body will particularly help in risk-taking.

When writing this, it suddenly occurs to me that I did not even know the names of half of the people in the group – of people who became very close during the week. Somehow it was not the point. And when you think of it, far too often we put names and labels on things, thus nailing matters down instead of letting something new and unique emerge. The memories of this week are very embodied and it will take some time for the bruises and scrubs to vanish from my body – these will remind me to keep moving and stretching. Thank you Joona for giving us your precious time and for opening new doors and new beginnings!

Dancing English Teacher holds an MA in English Philology and is a certified dance teacher. She takes interest in introducing dance and movement improvisation into vocational business studies. Dance is a shortcut to embodiment, kinesthetic awareness and efficient team work. Thus, business students benefit from dance and movement studies.
View all posts by Pia Kiviaho-Kallio →
This entry was posted in Uncategorized and tagged embodiment, havainnon harjoitus, Joona Halonen, movement. Bookmark the permalink.