Beam you up – and smile!

Presence starts from the face! It needs to be active and alert. Beaming. This week I ran into a 2500-year old face that made the deepest of impressions on me. A face illuminated by the archaic smile. The expression belonged to a sculpture on display in the Mediterranean Museum in Stockholm.  The Archaic Smile often appeared on Greek sculptures during the period of 600-450 BC and it is supposed to have signaled good health and wellbeing, as described by John Fowles: “timelessly intelligent and timelessly amused”. Today some historians interpret the smile as artificial and representing the equivalent of expressions we put on when photographs are taken. Thus, the archaic smile could be regarded as the Antique equivalent of “say cheese!” Nevertheless, a sad fact is that dull expressionless is far too often encountered in Finnish service culture. Finns might regard this as a sign of being authentic and genuine, the opposite of putting on a fake smile. This is what I often hear student say in terms of an explanation to their sullen faces. However, it should be remembered that a foreign customer would interpret a bland facial expression as disinterest or even hostility, the opposite of hospitality and service excellence. Therefore, at the beginning of my own lessons I always ask students to “do the eye lift” and I remind them that the eye is our quickest muscle. Secondly, I ask them to do the face lift – this resulting in a sort of archaic smile, I realize after having encountered this alluring limestone head. 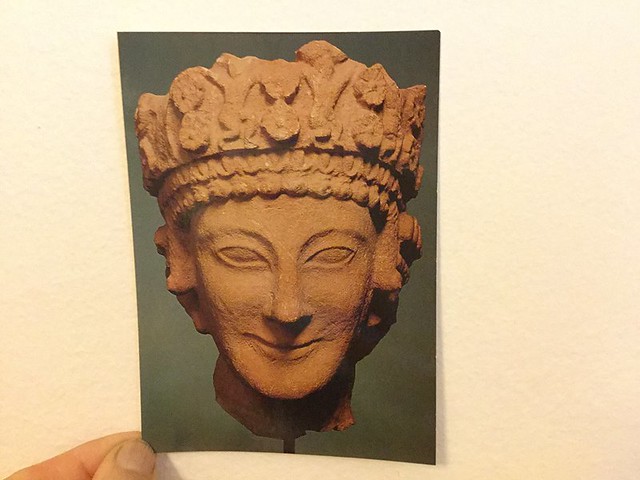 I have numerous exercises in my Business Ballet tool bag for practicing presence, the latest addition being the Star Trek-inspired “Beam me up” routine. Despite the reference to the vintage TV series, students have responded to the exercise with surprising ease. The instructions are very simple: you step into the transporter, the teleportation device used in Star Trek for getting to a planet. The teacher counts to three and says “click” and you dematerialize – this happens by shrinking and breathing out.  Then the teacher says “beam you up” and you slowly rematerialize, making sure that every single molecule falls into its correct place and you become fully visible on Campus. In sum, this is a process of fading out and fading in; any experienced teacher would know that students often remain slightly faded out. That’s why we need to make sure that they concretely understand the importance of being totally present in the classroom. Recently, we also did this exercise with the Resto competition team. In April four determined young ladies from POMO, the Finnish tourism programme, will be off to Rovaniemi where they will compete in the national Resto hospitality industry competition, this year being hosted by Lapland University of Applied Sciences. I have been appointed their movement and presentation skills coach and naturally I need to make sure that the team will stay beamed up and 110% present at all times. Here you can admire the beaming ladies from our first Business Ballet session in January: 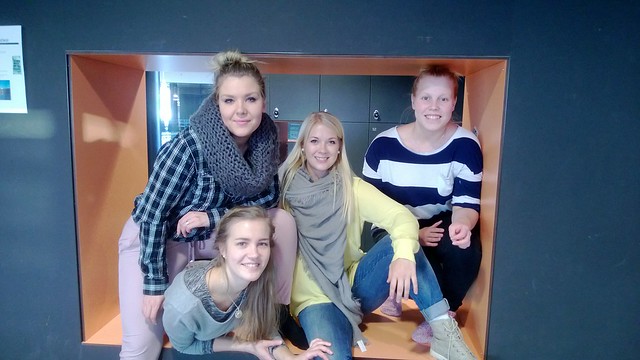 Finally, I am teleporting myself back to the Mediterranean Museum in Stockholm. Once again I’m asking the limestone head: “Who are you with that mysterious smile?  I noticed that you have dancer reliefs on your crown! Why? Did you use to dance in the shady halls of the Vouni palace? Would we have been kindred spirits and danced together on ornate mosaic floors? Hiding away from the scourging midday sun, forever shining on the ancient hills of Cyprus.”

Dancing English Teacher holds an MA in English Philology and is a certified dance teacher. She takes interest in introducing dance and movement improvisation into vocational business studies. Dance is a shortcut to embodiment, kinesthetic awareness and efficient team work. Thus, business students benefit from dance and movement studies.
View all posts by Pia Kiviaho-Kallio →
This entry was posted in Uncategorized and tagged archaic smile, beam up, Business Ballet, presence, Star Trek. Bookmark the permalink.