Vindauga in Valldemossa – upon looking through Chopin’s window

I only recently came across the etymology of the English word window, having its roots in the Old Norse word vindauga – wind´s eye. That is, a hole in the wall or roof for the purpose of letting smoke out, then allowing the wind to enter the room. Only later in history was the vindauga sealed off by wooden shutters or glass. From this summer I recall one particular window, that of Frédéric Chopin’s study in Celda Number Four in the Royal Carthusian Monastery in Valldemossa, Mallorca. This small window provided light for him to compose the Raindrop Prelude during the rainy winter of 1838-39, so vividly depicted in George Sand’s book Un Hiver à Majorque. His Pleyel piano being placed close to the window to shed light on the music sheets. When I come to think of it, it must have been very draughty in the damp Mediterranean winter. Thus it is no surprise that it was here where it finally became evident that Chopin’s tuberculosis had turned into a terminal stage. 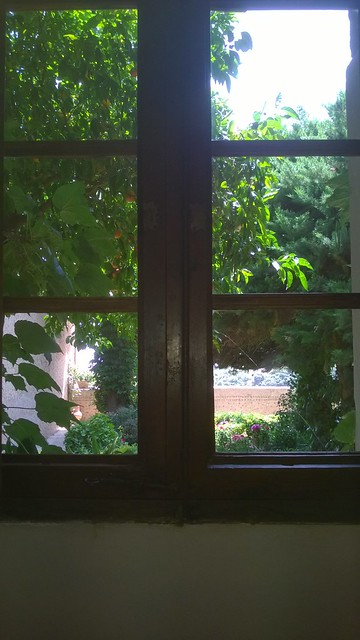 I tend to believe that intensely creative minds leave a trace in physical space. Rarely have I sensed this as strongly as in Celda Nr 4 with its day-time phantoms materializing within the thick stone walls. I can only think of one other similar place with as strong a connection to its past inhabitants, the Anna Akhmatova museum in Saint Petersburg. When lingering in the rooms of Celda 4, I listen to ancient whispers, absorbing the atmosphere into my skin. I then enter the secluded garden with its spectacular view down to the Valldemossa Valley. In the shadow of orange trees I try out a couple of Mazurka steps and I feel the wind catching the hem of my skirt. The spritely dance sequence is repeated by me and seven seconds of joy are caught for posterity on my cell phone. What blasphemy, the mobile device! I would rather have had George Sand’s artistic son Maurice sketching the scene in his tiny notebook.

Despite many hardships in the damp climate and among hostile villagers, this seems to have been a very productive time for the artistic couple. He composed and she wrote. Their difference in physiognomy is striking in the portraits on display – Chopin so frail and melancholic, Sand so strong and sanguine. Apparently drawn to each other by opposites, yet also by a shared passion for the arts and a strong urge to create. I rarely use the word passion since it is so often misused in our mundane times. However, in case of Sand and Chopin Passion is exactly the word that should be employed. For a dancer Chopin is ultimate ballet music and I recall the time in the early 80’s when my ballet teacher Margaretha von Bahr put together the ballet Les Sylphides (Chopiniana in Russian). This ballet created by Mikhail Fokine for the legendary Les ballets Russes in 1907 was entirely choreographed to Chopin’s music. Standing next to Chopin’s piano I strike a pose from Les Sylphides, asking my husband to take a picture. Yes, photographing is allowed within the premises. What blasphemy again! Yet a moment of true inspiration and euphoria, having found a secret passage to the souls of those people who stayed here so long ago. I look out the window into the blazingly hot afternoon and I hear raindrops accompanied by the Raindrop Prelude inside my head. What would life be without imagination, I ask myself? Without those brief defenestrations into alternative existences and universes. Something to remember when work starts again. 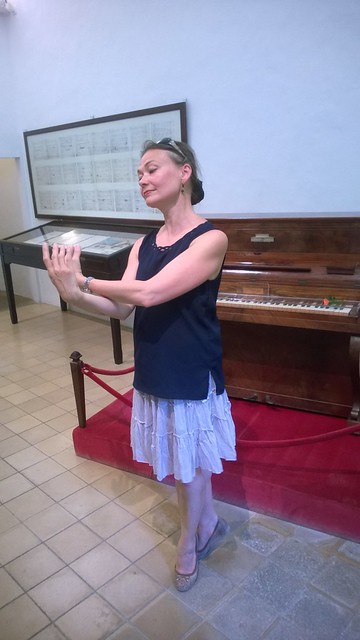 Dancing English Teacher holds an MA in English Philology and is a certified dance teacher. She takes interest in introducing dance and movement improvisation into vocational business studies. Dance is a shortcut to embodiment, kinesthetic awareness and efficient team work. Thus, business students benefit from dance and movement studies.
View all posts by Pia Kiviaho-Kallio →
This entry was posted in Uncategorized and tagged Chopin, Mallorca, Sand, Valldemossa. Bookmark the permalink.