A Pianist, a Hiphopper and a Prince: The Importance of Theater in a Business University

”If someone offers you an amazing opportunity and you’re not sure you can do it, say yes – then learn how to do it later.” (Sir Richard Branson).

When the Director of Culture Center Grand, Porvoo asked whether Porvoo Campus students could contribute with some program number during the occasion of Swedish celebrity journalist Herman Lindqvist’s lecture on Swedish-Finnish history, I offered to stage a theatrical interlude based on historical Porvoo. Honestly, I had no idea of how cumbersome the process of creating a 15-minute performance would be, yet, I have always lived up to Richard Branson’s motto of first saying yes, then only afterwards figuring out how to proceed with a seemingly impossible project. Moreover, I was convinced that a theater ensemble could be formed on Campus.

Little did I know then what a thriller I would be facing this spring. We had a fixed date, 27 April, and a specific request of producing a performance in Swedish about Swedish influence in the history of Porvoo. The beginning looked promising, since I had been approached by an international business student who was looking for theatrical activities on Porvoo Campus. Naturally, I immediately casted him as Russian Emperor Alexander I. The second person to join the performance was a Vietnamese Hiphop dancer, soon to be followed by a student pianist trained in the classical French conservatory tradition. At some point I also thought of my colleague who happened to own a Renaissance Prince costume. He kindly agreed to join the performance in the role of noble messenger to King Gustav Vasa of Sweden. Finally, a French-speaking exchange student was pleased to play the part of Académie Francaise delegate. However, at this point the project came to a sudden halt – there were no Swedish-speakers volunteering, nor any women. “Not my cup of tea”, was the general reaction to my rigorous attempts of recruiting more people to the cast. Thus, the script featuring Porvoo from Medieval times to modern days had to be rewritten several times in order to meet the constant changes in casting. Meanwhile, the performance day was approaching and I lost my sleep. Yet, a cancellation was completely out of the question as the reputation of Porvoo Campus students was at stake. Miraculously, less than two weeks before the performance the cast was finally ready. Without any Swedish-speakers in sight, at a very late stage I was joined by my Swedish-speaking colleague as leading lady. We had two full rehearsals on Campus and by magic we saw a tanzt theater performance gradually taking shape from all the fragments we had been practising separately. 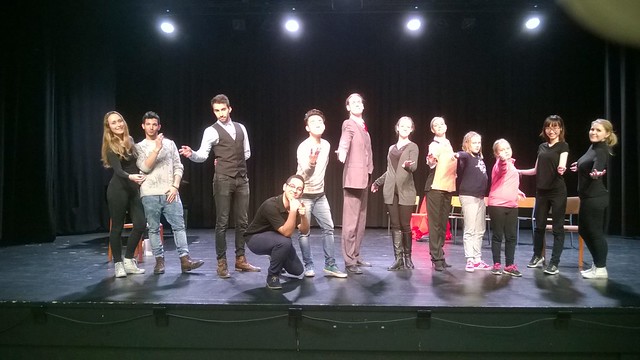 On 27 April, at 4 pm the whole cast was finally standing on the Grand stage. The Swedish aspect was strengthened even further by two spritely 10-year old girls, my colleague’s daughter Saga and her friend Selma, who brought girlish energy and enthusasm to the performance. We only had 1,5 hours of dress rehearsal, and then everything had to be in place. Needless to say, the auditorium was sold out to last seat. After all, journalist and author Herman Lindqvist holds super-star status among elderly Swedish-speaking Finns, so people had travelled from far to listen to him. This surprised our international cast, but also boosted our adrenaline to maximum levels. Yet, our ensemble had to wait through Herman Lindqvist´s one-hour talk before it was our turn to take the stage. Finally, everything went perfectly – with very little preparation we managed to deliver a multi-cultural musical dance show where both performers and audience enjoyed themselves. We could all be very proud of our contribution. 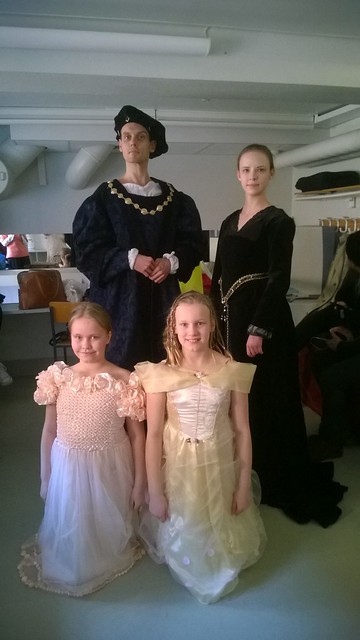 At this point someone might ask why a business university should be engaged in theatrical activities. What can theater teach business students? Theater is about ensemble work, focus and commitment. It’s about showing up to rehearsals, about not letting your team down. It’s about not chickening out, but stretching yourself beyond your limits when facing a sold-out audience. It’s about stage presence and about reading your partner’s mind. Naturally, all these skills are required to succeed in doing business. Finally, and most importantly, it’s all about the joy of being creative and inventive together.

At the end, our theater ensemble was reminiscent of those Medieval street theater ensembles, where people of different talents joined forces to very quickly put together a performance. Similarly, on Porvoo Campus the time to rehearse a performance is very limited. Yet, a miracle can happen when you put together a pianist, a hiphopper and a prince. Thank you Ismail, Adam, Son, Anna, Tatiana, Youssef, Laura, Amanda, Khanh, Ivan, Saga and Selma for the fantastic moments in Teater Svenska Rummet. It was pure joy working with all of you – we did it at the end! And seldom has there been as much laughter on Porvoo Campus as during our rehearsals. In our case thirteen, the number of cast members, turned out to be our lucky number. Hopefully this was only the beginning of theatrical activites on Campus. Any serious university needs a theater! 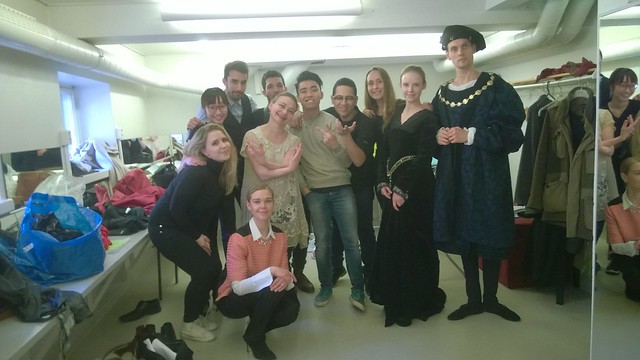 Dancing English Teacher holds an MA in English Philology and is a certified dance teacher. She takes interest in introducing dance and movement improvisation into vocational business studies. Dance is a shortcut to embodiment, kinesthetic awareness and efficient team work. Thus, business students benefit from dance and movement studies.
View all posts by Pia Kiviaho-Kallio →
This entry was posted in Uncategorized and tagged Kulturhuset Grand, Porvoo Campus, Teater Svenska Rummet. Bookmark the permalink.